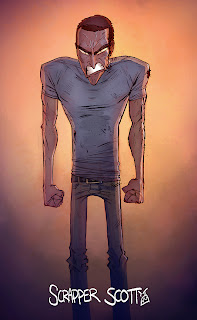 My little brother is one tough son of a bitch. Last night a crackhead broke into my mom's house while he was staying over and he chased the guy out. Apparently there was some sort of mix up, because my brother was then accosted by this guy with accusations of debts and drugs (he's not that kind of guy) and attacked with a screwdriver. He took a stab to the head, the arm, and a few shots to the body in the ensuing fight, but managed to fight the guy off in the end and run away to call 911. It was a close one, and I feel very thankful to still have a little brother. This is not a sketch to glamorize the violence in my brother, but his fighting spirit. If he hadn't fought tooth and nail (he bit him good), he'd probably be dead now, so you stay scrappy Scott! I hope you heal up quick and forget this nasty business.
Posted by Adam Temple at 2:14 AM

wow, crazy story Adam. Glad your brother is okay. It was good to meet yah the other day.

damn your bro is badass. This is a very unfortunate thing to happen. Hope he's alright man. Great art too haha!

Wow! Glad to hear a happy ending to that story. And yeah, the art...its great too. :)